THE FATHER IS ALWAYS AT WORK 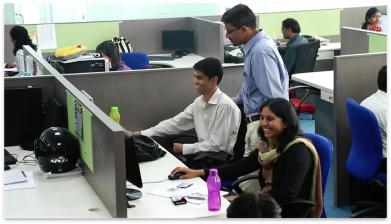 Like many church planters, on several occasions I have had to work two jobs in order to support my family.  Initially I resisted this, feeling like my “secular” job was keeping me from doing the work God had called me to in the church.  I was often frustrated by the time I had to spend, sitting at the office doing work that seemed meaningless.

THEN IT OCCURRED TO ME, “I SHOULD BE HAPPY TO HAVE SO MANY FRIENDS THAT DON’T NOW JESUS.”

Maybe that is why Jesus brought me here.”  So I began to pray, “Father, what are you doing  in this printing company?”  One afternoon, between assignments, I sat at my desk and prayed one by one over the twenty people in the office.  “FATHER, WHAT ARE YOU DOING IN SO AND SO’S LIFE?  ARE THEY OPEN TO YOU?”

I prayed for almost ever single person without hearing anything, until I got to the last person.  Suddenly the thought came clearly and strongly into my heart.  “I am working in __________ heart and she knows me, but she has walked away.  I want you to go and tell her that if she returns to me I will heal her marriage.”  I was shocked, quite honestly, she was THE LAST PERSON that I thought would be open to God.

For the next 24 hours I struggled with fear.  What if I was wrong?  What if I was just making this up in my own mind?  Finally I gave in and decided to start off slowly by telling her that I had been praying for her, and felt like Jesus said that she was very open to him.  So at the next opportunity I went up and asked.  Immediately, she smiled and said “Yes, that’s true.”  Encouraged by her openness, I shared the rest of what I had heard from the Lord.  Immediately, she burst into tears and ran into the Ladies Room.

Stunned, I went back to may desk.  An hour or so later I went back over to her desk.  Her eyes were all swollen from crying.  I apologized, “I’m sorry if I offended you”.  Then she told me the rest of her story.  She had in fact been a believer, but had wandered away.  Just the night before she and her husband had a big fight because of some illegal things that he had been doing.  She acknowledged that God was calling her back to him, and over the next few weeks she took some significant steps to return to the Lord.

“For we are God’s handiwork, created in Christ Jesus to do good works, which God prepared in advance for us to do.”      Ephesians 2:10

QUESTION:  WHAT ARE SOME WAYS YOU CAN DEVELOP FRIENDSHIPS WITH PEOPLE WHO DON’T KNOW JESUS?