THE VIEW FROM MY TAXI 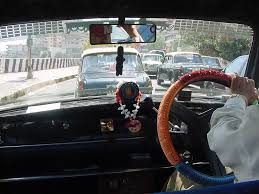 About a year ago I had a funny realization.  “If I don’t talk to people, I’ll never share the gospel.”  I know it’s pretty obvious, but I knew that the next step for me in becoming more missional was to work on being friendly with people I didn’t know.  The next day I decided to visit with the taxi driver on the way to the airport.

The win for me was being willing to care enough to engage in a conversation with a stranger.

It started out with the usual small talk.  “Good morning.” “My name’s Rick.”  Stuff like that.  After a while, the conversation started to lull and for some reason I blurted out, “I see Ginesh on the dashboard, you must be Hindu.”  What was I thinking?  This was totally unplanned.

“Yes, all of us in India are Hindu”, he replied.  After a few minutes I said, “I’m a follower of Jesus” and he said, “Yea, I know” assuming all white foreigners were Christians.  I’m in it now, I thought.  I might as well keep going.

“Do you know very much about Jesus?”  “Oh yes” he replied, “every Christmas my family celebrates his birthday.”  He continued, “You know, Krishna and Jesus are really the same.”

This wasn’t the casual conversation I had planned.  My mind started to race.  Finally I said, “I know a little about Krishna, and alot about Jesus.  I think they are actually very different.”  We both sat silently for a few minutes.  I imagine he was just as uncomfotable as I was.

Suddenly I got the idea to ask if I could tell him a story about Jesus.  “Sure” he responded.

For the next three or four minutes I told him the story of Jesus healing the man with leprosy.  I quickly concluded.  “Jesus is a very loving God.  This man called out to Jesus, and Jesus responded to him with great love.  Jesus is also a very powerful God.  He just touched this leper and he was instantly healed.”

We finished the last few minutes of the ride to the airport in silence.  I’m not sure, but I got the impression he was thinking about Jesus.

QUESTION: What are some meaningful words that you have found effective in talking to strangers about Jesus?